I enjoy reading Charlie Parker's blog "Lines & Colors" & was very interested by his post this week on “Tilt-shift photography”. In short, the technique produces photographs which give the impression that real life scenes are photos of miniatures. Click here for Charlies article

Following through a trail of links, I found Keith Loutit who is a Sydney based photographer. Keith uses the tilt shift technique in combination with time lapse to create the "miniature" effect in small films. I find this one of Sydney "The North Wind Blew South" fascinating & is a new way of seeing a city I have lived in for 40 odd years. I wonder if the technique will work in paint?

The North Wind Blew South from Keith Loutit on Vimeo.

Visit Keith's website to see more of his films & photographs. 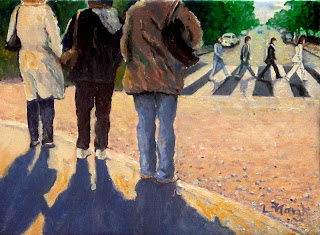 Oil on Board
5 x 7 Inches (13 x 18cm)
This painting came from a photo posted on artist Karin Jurick's “Different Strokes From Different Folks” blog. Karin posts a photo and other artists do their interpretation of it.
The photo had a crossing infront of the pedestrians , but a crossing only conjures one image in my mind. So I couldn't resist relocating the crossing and "the rest is history". Obviously brainwashed as a teenager.

Are you old enough to remember all the rumours & folklore that arose about the album cover when Abbey Road was released in 1969. The image of the Beatles on the crossing took a life of its own. Paul was rumoured to be dead and this was seen as a funeral procession. George in his denims was seen as the gravedigger, Ringo in black was the undertaker and John in white was the clergyman. Paul was barefoot and had a "coffin nail" cigarette in his hand.

And that was only part of the "interpretations" that people conjured up, the cars in the sreet also attracted symbolic qualities Click here for more.
Twenty four years later Paul released an album called Paul is Live, and the cover used retouched image of the original photograph with him & a sheepdog on the crossing
I suppose it was the end in one way. It was the last album recorded by the Beatles, even though "Let it Be" was released later.
Visit Karin Juricks “Different Strokes From Different Folks” Blog 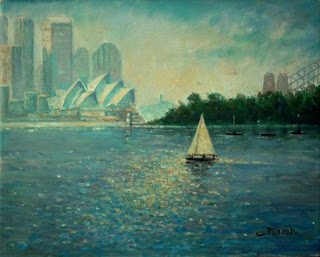 I enjoy the sparkle of light when it ripples across the harbour as we look past Cremorne Point to the Sydney Opera House.
At Cremorne Point there is a very pleasant walk with spectacular views around the harbour foreshore to Cremorne Point, and then continue onto Mosman Bay. More information on the walk at this link
This painting is now sold.
click here to contact
Posted by Fred Marsh at 10:06 PM No comments:

About "The Painted Journey"

The "Painted Journey" is a continuing exhibition of small paintings that illustrate my “wanderings.” Part inspiration came from Edmund Whites book “The Flaneur”, in which he wanders through the city (of Paris) in order to experience its many facets.

The paintings evolve from combining passions for painting with observations of people, places and objects in contemporary situations that attract the eye and mind.

It may be the quality of light, the shape, the colours, the emotion, the smell, or the feel of the sun on my back that has attracted me to the subject.